We were told to be prepared for rain in Edinburgh. Unfortunately we were not prepared for the deluge that greeted us on our fist day there. With less than 24 hours before we had to leave, we did our best to see some of the sights along Edinburgh's Royal Mile

One of the problems in visiting a city for just a short amount of time is trying to decide what to see and where to go. Edinburgh solves that problem for you by having a parks, cultural, historical and political sites within a very small area.

The Royal Mile runs between the Palace of Holyroodhouse and Edinburgh Castle. From St Margaret’s Chapel, built in the 12th century, to the Scottish Parliament, opened in 2004, Over 500 years of history are compacted in a few square miles.

We arrived from York at the Edinburgh Waverly Station, just a short walk from the Hotel ibis Edinburgh Centre Royal Mile, where we were staying.

Except I got lost.

In my defence, Waverley Station is huge. The area was once the bottom of ‘Nor Loch’, a small lake separating the ‘Old Town’ from the more ‘upscale’ area along Princes St. The lake was drain in 1766, to form a canal and green space. The current train station was built in the mid 1840’s after an act of parliament allowed expansion into the Princes St green space.

I had exited onto Princes St. instead of Market St, on the opposite side of the station. After a few minutes, I realized my mistake and we made our way to North Bridge. The current bridge connecting Princes St to ‘Old Town’ was opened in 1897 replacing an older bridge dating from 1776.

Our hotel was on Hunter Square, at the top of Blair Street, between High Street and Cowgate. Street. ( Street names seem to change with every bump in the road. ) Between Holyroodhouse and Edinburgh Castle you are on Canongate, High Street and Lawnmarket. Together they make up the ‘The Royal Mile’.

After a quick lunch at Garfunkel’s, we started towards Edinburgh Castle - in the rain. What had started as a drizzle before lunch was now a down pour. I had to purchase a small, rather expensive, ‘tourist’, umbrella which my wife held over my camera as I took pictures. ( My wife had to buy a plastic cape because the zipper on her raincoat broke. She won’t let me show the picture ;-)

There were a large number of alleyways, or Closes, along the way to the castle. The most famous is Mary King's Close, an alleyway that is underneath the current street. ( Book your tour online)

NOTE: The Scots are proud to point out, that unlike the British Crown Jewels, the actual “ancient Honours of Scotland - the crown, sceptre and sword”, not replicas, are on display.

After stopping for tea and a scone at Saint Giles Cafe ( on Saint Giles Street ) we decided that the rain had won and we retreated to our hotel to dry out.

The next day started a bit better. Overcast with a bit of fog.

We walked down Blair to Cowgate, which parallels the Royal Mile, down to the parliament buildings and Holyroodhouse. ( Cowgate changes to Holyrood Rd. at St. Mary’s St. ) Starting early, there weren’t many people ‘out and about’. At one hotel, the doorman was just finishing sweeping the sidewalk before taking his post.

As you walk down Holyrood Rd., Holyrood Park and Arthur’s Seat are on your right. At the end of the road the Dynamic Earth Science Museum is also on the right. The Queensberry House and the Parliament Buildings on the left. The Palace of Holyrood House is across the grounds of the park to the left.

After ‘tea and scones’ at Holyroodhouse, we started back up the Royal Mile, making our way back to the train station.

If, like me, you enjoy exploring those little bits of history just off the tourist track, you will love the lower section of the Royal Mile. A number of Kirks ( Churches ) and Closes invite you in. The ‘Garden at Dunbar’s Close’ is set up as a typical medieval garden with shrubs and herbs laid out on square raised beds. Further along, explore the cemetery at Canongate Kirk, which dates back to James VII of Scotland ( aka James II of England ). James VII had ordered the building of the Kirk in 1688. The kirkyard is the final resting place for a number of famous Scots including Adam Smith.

After spending so much time exploring, it was time to return to Waverly Station and our train south. Getting there just in time to grab two pasties from the Cornish Pasty Co. stand before catching our train. 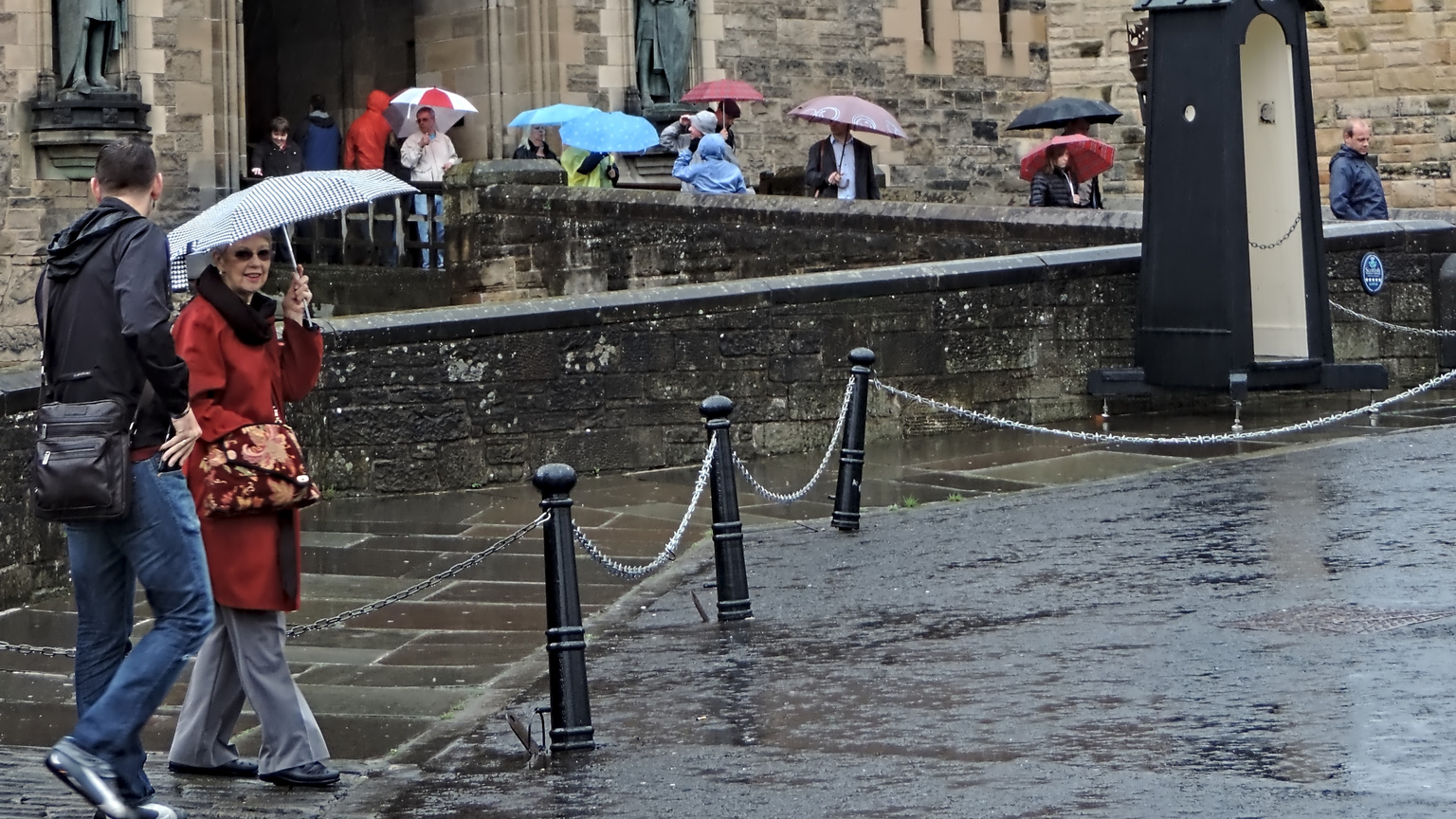 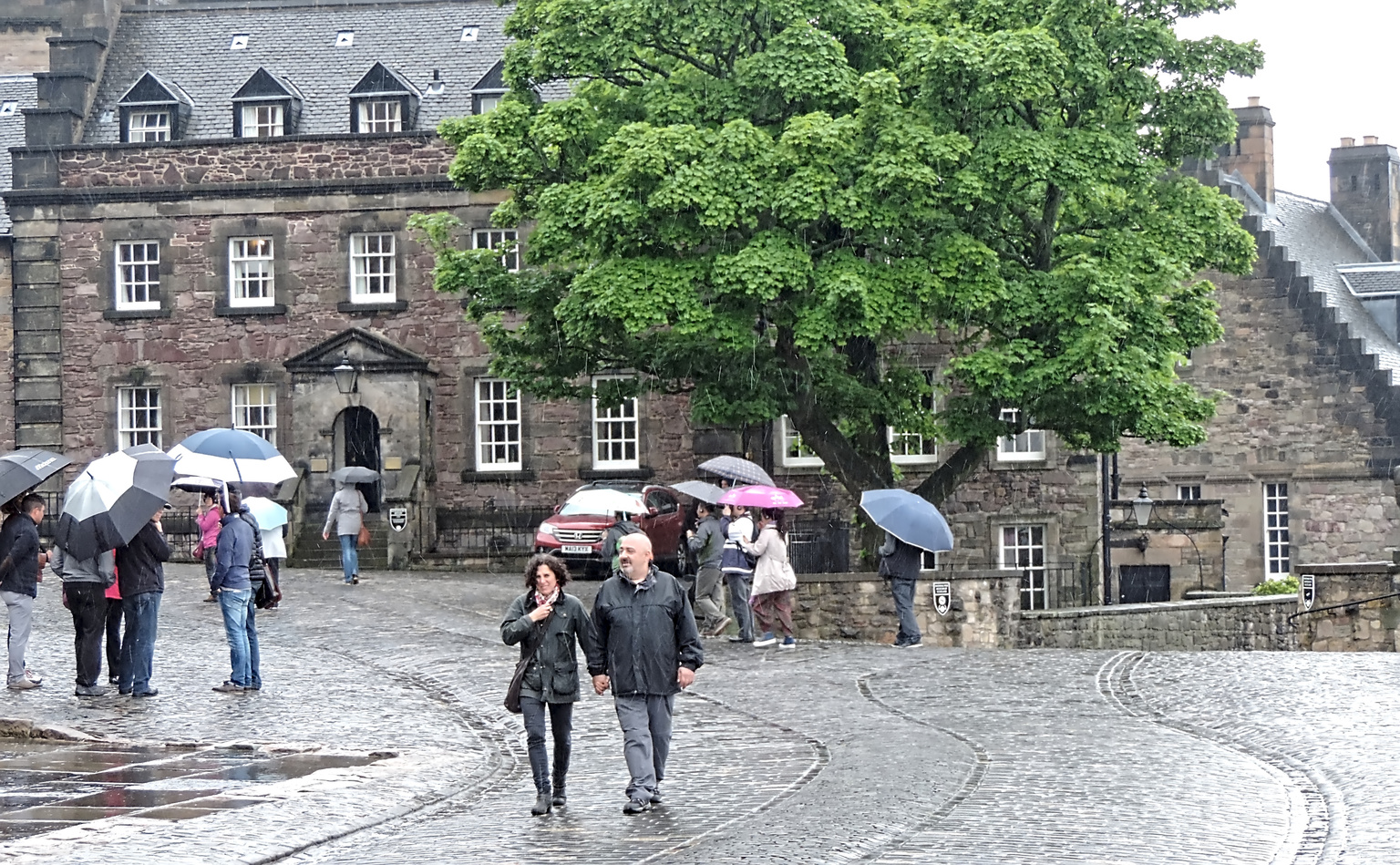 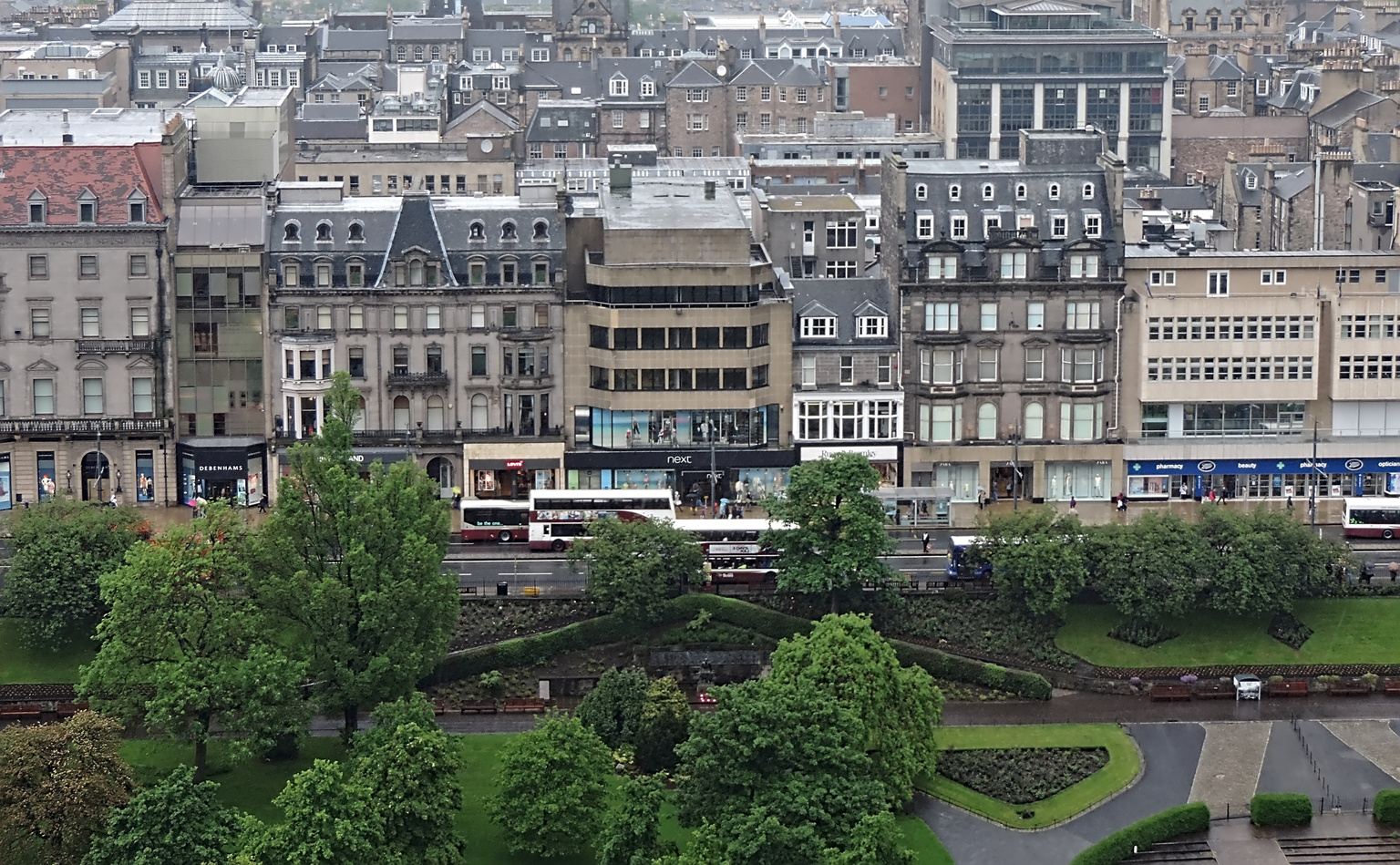 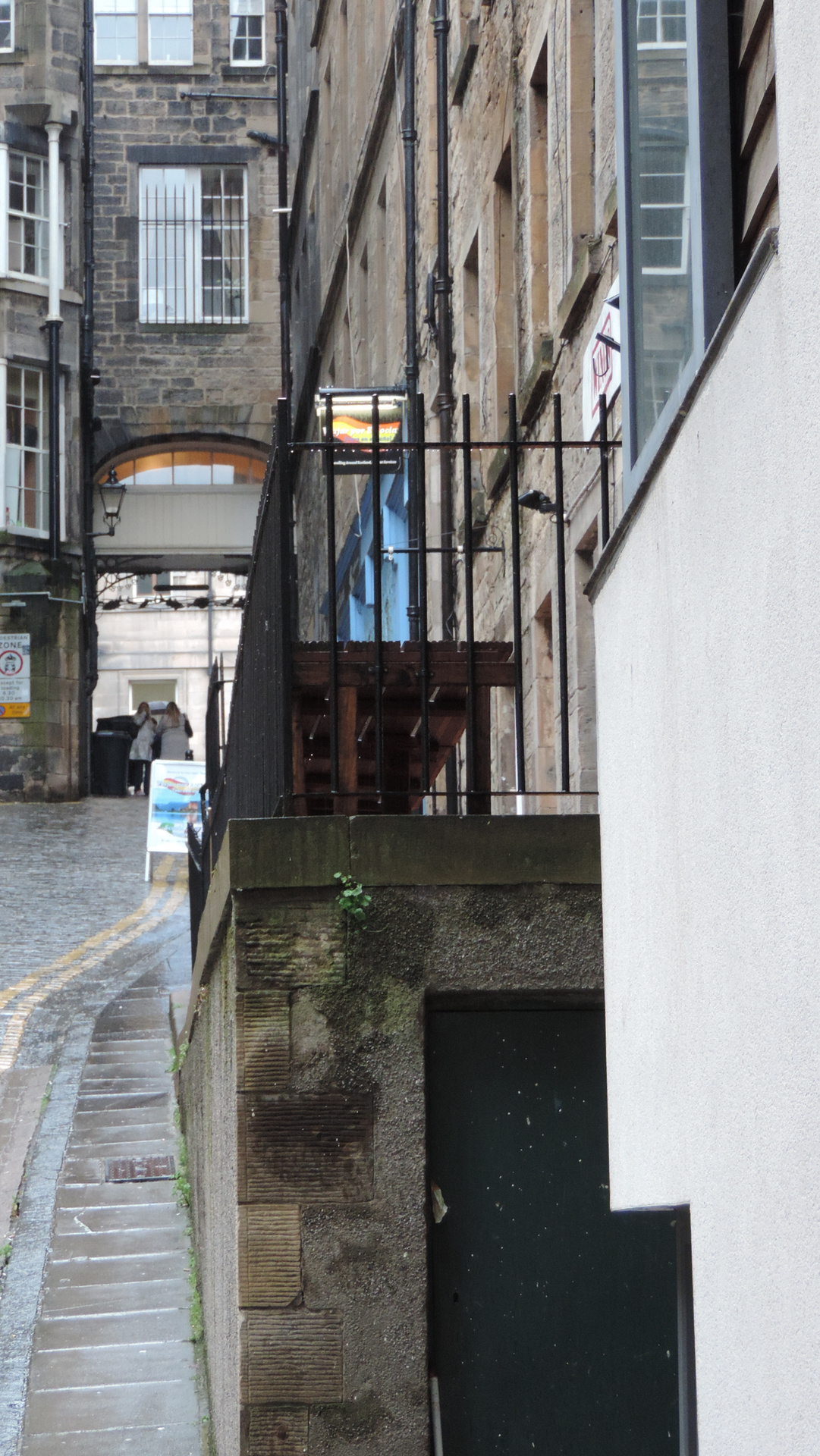 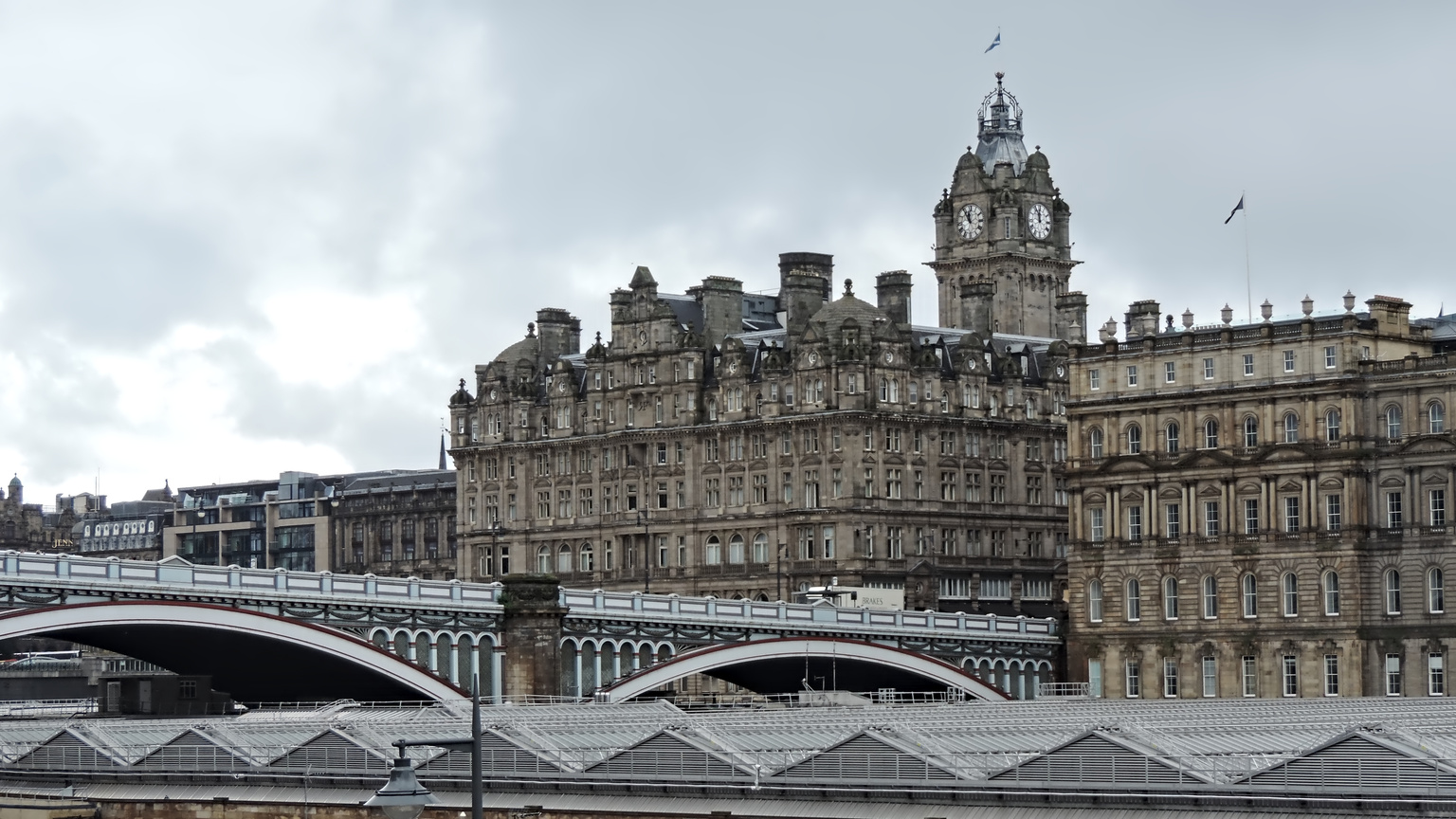